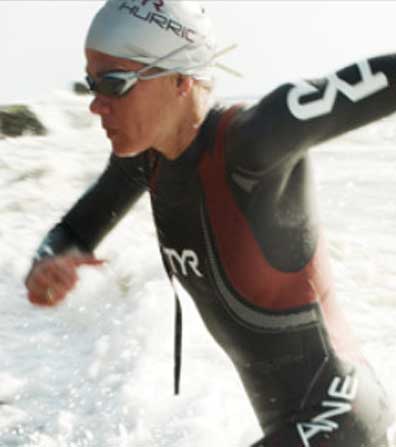 The Australian-born athlete made her Kona debut in 2009 and finished in second place. In 2010, she moved into the top spot and earned her first championship title. The following year she snagged second place, and the year after that she took third. Considering Kona is one of the most physically demanding races in the world, any podium finish is certainly impressive, but Carfrae was determined to get her hands on the first place title once again. In Oct. 2013, she did just that.

Soaring across the finish line with a time of 8:52:14, Carfrae took first place, earned her second championship title and set a new course record in the process. (The previous record was 8:54:02.) She became the first woman in history to break 9 hours at Kona three times. Additionally, her incredible 2:50:38 run split set a new women’s marathon record and made her the first female champion to run faster than the male champion.

As if these momentous achievements weren’t enough to celebrate, Carfrae went on to tie the knot with long-time beau and professional American triathlete Timothy O’Donnell in December 2013.

“I’ve had an amazing year on so many levels both professionally and personally,” said Carfrae. “I look forward to really pushing the limits of what I can do in triathlon and know I can’t do it alone. The intimate support from family, friends and sponsors are a huge part of my journey to the top. TYR has always made sure I was in the best equipment for the job and now they are one of my biggest supporters. They have an amazing product and dynamic team working with me as I continue to push my limits to fulfill my goals in this wonderful sport.”

Mirinda Carfrae is truly leading a charmed life, and TYR is thrilled to continue to support her in her future endeavors.